I'm Jan and I work as a frontend developer at Kraftvaerk where we create Umbraco solutions that provide great value for the client and their clients.

Today's post will not contain a single line of code - it will be about the cornerstone of Umbraco: The community!

Without this amazing global community that Chief Unicorn (aka Dear Leader (aka Niels Hartvig)) has been able to build over the years, Umbraco would not be at the place where it is today. The community is the true power behind the Umbraco project. Currently there are more than 30.000 active users on Our.

It's also because of this community that Umbraco has been able to survive after the decision to kill Umbraco 5 was announced at Codegarden 12 (CG12), which had been promoted with all kinds of talks about all the cool stuff that could be done in V5. I must admit that I was relieved when the decision was taken at the CG retreat, even though I was probably one of the very last to accept that it was the right move, out of concern about the future of Umbraco.

During the development of V5 it was as if the community was holding its breath in excitement to see what the brilliant developers in the HQ released next, rather than being much more involved in the project. Somehow V5 turned into a HQ project and the HQ and the community disconnected. It was like the community was running out of breath...

But what an amazing turnaround we've seen since CG!

Umbraco is now more amazing than ever! The old codebase is slowly being changed to the better and the best ideas from V5 are progressively being implemented in the different releases of Umbraco.

The community is breathing again, people are creating packages, even local user groups are collaborating about nice packages to enhance the back-office with new options, and people are participating in the various discussions about core development and the new back-office UI project codenamed "Belle".

Local user groups around the world have even had hackathons where they have focused on eliminating some of the minor bugs that on a daily basis can be a major pain for a developer or an Umbraco editor.

At the end of the year we will hopefully see the conception of Umbraco 6, which primary feature is a new public API that should be easier to work with. Who would have believed all this progress about 6 months ago? #H5YR community!

This really shows that the community unite to make Umbraco the best it can possibly be.

The future of Umbraco is looking bright for sure. But there is always room for progress and things that can be done smarter and better.

...So how can You contribute?

There are many ways to contribute to the Umbraco project:

Our
You don't have to be a hardcore developer in order to be able to make a difference. You can contribute by helping people out on Our, if you see someone having a problem you just found the solution for last week. Get in there and share the solution. You actually also contribute by asking questions... so go ahead and ask if there is something you're in doubt about, whether it's related to the Umbraco core or some of the many great packages for Umbraco. I'll guarantee that you will get a friendly answer from some clever minds!

Bughunting
If you find a bug you'll be doing us all a favour by submitting it to the Issue tracker where the ever friendly Sebastiaan Janssen will figure out if something similar has been reported earlier, or if it has already been fixed. But let's not give the poor guy too much work - do him a favour and check if the issue you experience has already been reported. In that case, you can just vote it up. By voting you make it visible that this is something that should be taken care of. Before posting a bug you can also create a post on Our, or maybe even tweet to figure out if others have experienced the bug.

Core contribution
So if you're one of the hardcore .NET developer guys that know their way around in the core, or you think you can easily figure it out, you should of course be a core contributor. Then go ahead and create a fork of the source code and start driving HQ nuts with all your pull requests. Remember to keep an eye on the dev mailing list as well.

Documentation
This has always been known as the weak spot of Umbraco. And even though it's all become a lot better, people still complain about the lack of documentation. At some point I think the complaints are valid. But once again, we all have a responsibility to help document our lovely CMS. Therefore you can now grab your own fork of the documentation project and start writing nice documentation to the benefit for all of us!

Belle contribution
Finally there is an Umbraco project where frontend developers can show off their skills and contribute. The new interface is of course also open sourced. So go fetch the source for Belle and give it a spin. Remember to raise your voice in the debate about Belle too.

Host a hackathon
You can make an initiative to host a hackthon somewhere in your local community where the agenda can be to fix bugs, or perhaps work on a new killer feature for Umbraco. It could also be a hackathon on improving Our. If you're around Copenhagen on December 18, then sign up for the Our hackathon.

User groups
Create a user group and host some events. The kind of events you can host varies a lot. Some user groups meet up at a pub in the evening once a month to have a nice chat and perhaps show off some cool stuff they've been brewing on. A user group can also host a bigger Umbraco Festival, which is usual a whole day of interesting Umbraco topics where local people and people from abroad can attend. So in short, the user groups don't need to host big events, they just need to gather some people and have a good time while discussing or playing around with Umbraco.

Blog
If you have found a cool way to achieve something using the Umbraco API, Razor, XSLT or how to build good IA in the content section, please do blog about it if you run a blog already.

Twitter
If you're on twitter make sure you keep an eye out for the #umbraco hashtag to see what people are writing about Umbraco. Some are looking for help, some are praising and a few are ranting. Also keep an eye on #umbLaunch, which is used when you have just launched an Umbraco site and want to brag about it. (It might give you some #H5YR in return! Yiiipeee! :)). If you attend CodeGarden you need to know about the #CG13 and #cgrumors tags as well. The latter is usually first used when it's bingo time! :)

I'm sure I probably missed out on some of the different ways to contribute in the above so feel free to notify me in the comments if you feel something should be mentioned.

So there really is no excuse for not engaging in the evolution of Umbraco, right? :)

That's it folks, remember to have fun and be friendly! Looking forward to seeing you all again at CG13.

Merry xmas and happy holidays everyone. 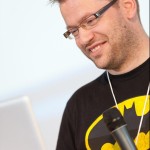